It’s time to set sail for the next sea!

The new event has started in Pokémon Rumble Rush. This event, Arceus and the Isle of Myths, is focused on an island based around Arceus and contains various Pokémon, all Sinnoh Pokémon, new Gears and more. It runs for three weeks, until May 6th. This is the first time many of the Sinnoh legendaries and mythicals including Shaymin and the various forms of Arceus have been made available so now is a great time to collect them all.

As always you can use the previous gears and Pokémon you’ve obtained throughout your journeys thus far to assist you in exploring this sea. Six new gears have also been made available, two of which are upgrades from existing gears. Similar to the previous sea, there are two Judgement (Arceus) gears, one more powerful than the other. There’s also Aura Sphere (Riolu) and Aura Sphere (Lucario) as newly available gears. The upgraded gears this time are Rock Blast (Golem) and Signal Beam (Venomoth) so be sure to grab these gears while you can. While it’s too early to tell where all available types are at the moment, it does appear that rock types are more common at Arceus’ head and normal types appear in the secondary island shaped like a ball of energy.

There will also be a new battle royale event starting on April 22. The Shaymin Cup will open up and last until May 6th along with the Arceus event so be sure to participate in both! 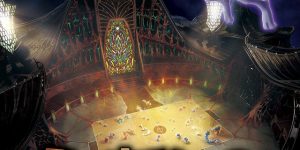