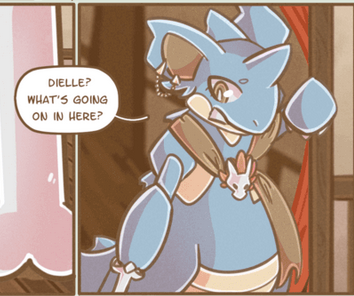 We’re a little late this week due to technical difficulties but that won’t stop us from taking a look at PMD: On Borrowed Time. PMD: On Borrowed Time is a reboot of an older comic of the same name. It is a Pokémon Mystery Dungeon Explorers of Sky dungeonlocke, where the rules of the traditional nuzlocke have been modified to fit the PMD setting. This makes for a rather interesting story in its own right since it’s rare to see PMD comics nowadays where characters can and do die. And while PMD: On Borrowed Time hasn’t gotten there yet, it’s possible that it will in the future.

The story centers around Rune, a vulpix that woke up on a beach with amnesia and no voice. Unable to speak and only writing in mysterious runes, the first person to encounter her, a Shinx named Malachi is left puzzled over her sudden arrival and what it means. From here, the story takes a very different path from the source material. The author, Wooled, slowly diverges the comic from the original PMD: Sky story that many fans known and love, and puts her own spin on it. Without spoiling too much of the early chapters of the story, Rune and Malachi don’t get accepted to Wigglytuff’s Guild automatically, having to take a test instead. And from there, the story moves in an entirely new direction.

The story also features very unique characters and design elements that, on top of the more original story, make it a very interesting read. For one, Rune is no ordinary Vulpix. She’s actually a Keokeo, or Alolan, Vulpix. The author has stated that she hacked the original PMD: Sky game in order to play it as if Rune were actually an Alolan Vulpix to make the whole thing or authentic. In addition, Malachi is not your typical Shinx either. It appears that Malachi is half-evolved or something similar, as many people in the town mistake him for a Luxio. It’s not really known why this is but it seems likely it will be addressed in the story later on. There’s also characters like Requiem and Maelstrom, who are just as mysterious as their names sound. Reqiuem is a very uniquely and beautifully designed character that, while they resemble a few different kinds of Pokémon, it is unclear exactly what they are. But they definitely seem to have an important role to play in the future. Maelstrom also is fairly mysterious, though notably, she has deemed Malachi her champion, whatever this may mean.

In addition, as it is still Pride Month, it would be remiss not to mention that there is a decently large LGBT+ cast in this comic. This includes the main character, Rune, who is bisexual. Chatot and Guildmaster Wigglytuff are also members of the LGBT+ community, being gay and pansexual respectively. Reqiuem, according to the cast page of the comic, is a demigirl. Finally, as revealed in the more recent updates, Kangaskhan of Kangaskhan storage and the Nidoqueen in charge of Treasure Town dojo are wives! So while this is most certainly not the only reason you should read the story, as the artwork and story alone make the story well worth it on its own, as always, a bit of representation in a comic is always appreciated.

And while you’re here be sure to check out the rest of the comics featured this week!

ComicFury Comics
Digimon Saviors 2 Oh! It’s a Zerimon!
Hypoxia || A Pokemon SS Nuzlocke What a nice elder.
PMD: Anamnesis Poor Sappho seems really bent out of shape about this.
PMD: Gleaming Hearts Seems Claude isn’t going to take this sitting down.
PMD: Mitigation That seems like a tough promise to keep.
The Power of Pouvoir Gym puzzle time!
The Stars Shine Bright That thing is alive you know.

Deviantart Comics
After the Ashes Is it time to tell Cheren?
Mahiwaga Oh man a new suspect in this murder.
Penumbra Uh oh… do they know each other?
PMD: On Borrowed Time WIFE WIFE WIFE
PMD: Outlanders Hardcore parkour!
Primal Silver They won! But at what cost?
The Essence of Being Uh oh, Ronas was spotted!
Trick of the Night Anise must be overheating!

Off-site Comics
Captyn Clyde Daily Webcomics A bait and switch!
Lil Char and the Gang Man I like this guy already!
Moképon Well at least it’s not a Clefable.
Pet Foolery Man… I was sure that would work too.
PMD: Exploration Team Ultra To the Guildmaster’s Office!
Steven Universe: Gone Wrong Yeah this must be really hard for Bismuth.
Twokinds So many unwanted memories I’m sure. 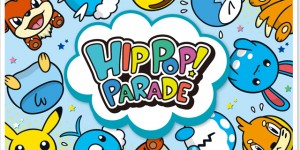