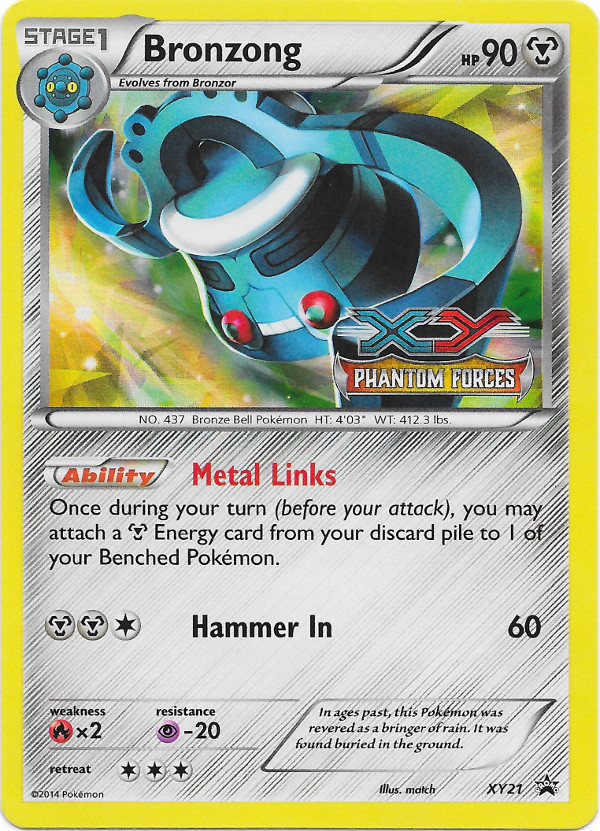 Several new decks are being made thanks to the cards that have came out from Phantom Forces. This week we will be looking at the cold and hard side of the Pokemon TCG. This Pokemon plays an important role in the steel arsenal that is the Metal type. Now Metal types in the TCG can easily roll into battle thanks to the links that this Pokemon can provide. It will literally provide the energy that Metal types need to hit the battlefield hard. This week the Featured Card bell tolls for Bronzong!

Bronzong is a Stage One Pokemon with 90HP. It is a Metal type Pokemon from Phantom Forces with a hefty three energy retreat cost, a weakness to Fire types, and a resistance to Psychic types. Bronzong has a single attack called Hammer In that simply does 60 damage for two Metal and a Colorless. Though, Bronzong won’t be valued for his attack power but instead for his ability! Bronzong has an ability called Metal Links which allows you to attach Metal energy from the Discard Pile to your benched Pokemon. You can only do this once per turn per Bronzong but that is all you need once you have a few Bronzong on your bench and Metal energy in your discard. After that, you can Metal Link a Pokemon to hit the battlefield.

Bronzong will never be attacking and if this card does then you are in a pretty bad spot. Now that we have gotten that out of the way, lets talk about what we will be using Bronzong for: Energy acceleration. Having the ability to attach more then one energy in a turn has always been highly valued. We have seen decks using cards like Blastoise and Eelektrik become popular just for the fact that they can power up big attacking Pokemon with devastating power over and over in the TCG history. Bronzong will make sure to brings the same success to Metal decks as well with the ability to pull Metal energy from the discard. If you have two Bronzong on the bench and a Metal in your hand then you can quickly power up a Cobalion EX to hit any Pokemon for a solid 100 damage in a single turn.

What other Pokemon could take advantage of Bronzong and his Metal Links? Dialga EX from Phantom Forces may want to be on the receiving end of Metal Links. If you slap a Double Colorless Energy and two Metal energy from Metal Links then you can fire a Full Metal Impact to do a 150 damage in one turn. If you want to knock out the 170 HP Pokemon using Dialga EX then attach a Muscle Band and prepare to say good bye to your opponent’s EX Pokemon and hello to two prizes. Then to help create some synergy, Full Metal Impact discards two Metal energy attached to Dialga EX. You can use these Metal energy in the discard to attack to another attacker next turn and switch to a fresh Pokemon to attack with. Possible buddies that would love Metal energy from the discard could include Aegislash EX, Cobalion EX or another Dialga EX. All of these are great options that could do amazing things once they hit the field.

What are some cons for Bronzong? The first one is that it is the cornerstone of a deck which relies on an ability. That means Garbodor and possibly Wobbuffet can shut down Metal Links and that valuable link to the Metal energy in the discard. That is never fun and may be worth playing a Startling Megaphone and possibly Xerosic to discard items on Garbodor. You will also have to deal with people trying to knock them out using Lysandre and Pokemon Catcher to slow down your energy acceleration.

Another con for Bronzong and basically every Pokemon that will be considered attackers in this deck is their weakness to Fire types. Flashfire has created a resurgence in Fire Pokemon with Pyroar leading the charge. Pyroar can knock out any Steel type as long as it discards a Fire energy when using Scorching Fang thanks to the Fire weakness that Metal types have. There is a chance that Bronzong can power up a Cobalion EX with a Muscle Band attached to it to use Steel Bullet to cut though Pyroar’s Intimidating Mane but the chance of a revenge kill by another Pyroar is always possible. Alegislash EX can also use it’s Mighty Shield ability to literally shield off Pyroar’s assault if the attacking Pyroar has a special energy attached. Though, this may not be something you want to depend on as this shield due to how easily it is to get around it.

Another Fire Pokemon that has always been hiding in the shadows is Plasma Flareon who, like the Metal type playing with Bronzong, also gains power from the discard. Flareon can attack for a single DCE with Vengeance that has a base power of 20 and will increase by 10 with each Pokemon in the discard. Thanks to the new card Battle Compressor, getting Pokemon in the discard is easy for Flareon to burst into battle. Once Flareon is powered up with seven Pokemon in the discard, it can easily cut though Bronzong and friends like a hot knife though metal butter.

Lastly for cons, Bronzong has a heavy retreat cost and HP that is considered low. Three retreat cost can ensure that Bronzong will be the active for awhile without the assistance of Switch, Escape Rope or Float Stone. That is if it stays in the active long enough to take a hit from Pokemon that can easily do 100 damage for three energy.

Where will Bronzong’s ringing be heard? In Metal decks of course! As mention before, you will use Bronzong to attach Metal energy to much more battle capable Pokemon on the bench. Several Pokemon who would love to receive a jump start of Metal energy includes: Alegislash EX, Cobalion EX and Dialga EX. Alegislash EX could serve a few uses as a Pokemon that can hit moderately hard while also gaining immunity from damage thanks to Mighty Shield. Any Pokemon attacking with a special energy will not be able to harm Alegislash EX. This may actually be useful thanks to amount of decks using special energy such as Rainbow Energy and Strong Energy. So using Bronzong to power up this Pokemon may not be a bad idea. An even better idea is having Keldeo EX on the bench with a Float Stone attack to force an active Pokemon who needs Metal Link energy attachment back onto the bench. Have Keldeo EX use it’s Rush In ability to force it into the active while putting the currently active Pokemon on the bench. Have Bronzong attached some energy to it and then have Keldeo EX retreat back to the bench using a Float Stone. Then continue the metal march of knocking out one Pokemon after another. Repeat this process over and over.

Another interesting idea is to run Bronzong with Plasma Klinklang. This may take up a little longer to set up but the idea is to have energy acceleration with damage immunity from EX Pokemon. This could be helpful if you set up Plasma Klinklang first. Thanks to Plasma Klinklang’s Plasma Steel ability, all Metal Pokemon can’t be damaged from attacks of EX Pokemon. That means you can set up your multiple Bronzong and accelerate Metal from the discard with ease and little worry about getting hurt.

So watch out for the ring of Bronzong as it tries to give Metal Pokemon decks a new tune. This card has a lot of potential in a type that has several interesting players in it. Make sure you keep an eat our for Bronzong or you may find yourself attacked by an arsenal of metal mayhem. 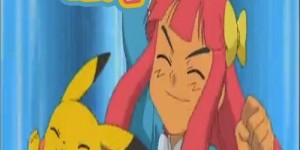 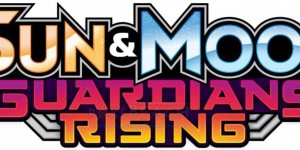