Ya boi Guzma and the guardian Tapu Koko are here to decorate your 3DS!

Two new 3DS themes have been released for Japan and North America today. Costing $1.99 each to download, the two skins feature everybody’s favorite boi Guzma and a shiny Tapu Koko.  The first skin is entitled “A Sinister Organization: Team Skull” which features artwork of Team Skull and plays the Battle! Team Skull Boss music from Pokemon Sun & Moon. The second skin is called “Shiny Tapu Koko” featuring artwork of a Shiny Tapu Koko as well as Lycanroc, Golisopod, and Kommo-o and plays the Battle! Guardian track from Pokemon Sun & Moon. 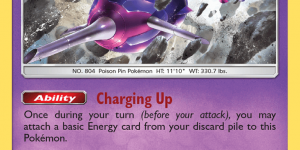