In less than a week, the sixth generation of Pokemon games will have launched. Millions of people around the world will begin playing X and Y.

A new adventure awaits us. 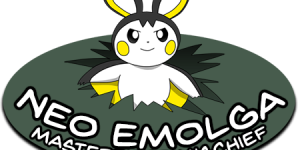