Today is Volcanion Wednesday as we have all kind of news regarding this Mythical Pokemon. Volcanion has now started his siege on the Pokemon TCG, Video Game and anime!

Today marks the release of the eleventh TCG Expansion, Steam Siege! The new TCG set will be the debut of Volcanion EX who will surely steam up the trading card game with new strategies and decks. Volcanion EX’s Steam Up ability can power up attacks of any Basic Fire type Pokemon by 30 as long as you discard a single Fire energy from your hand. This ability will surely heat up the battle as you set your opponent’s side of the field on fire. Volcanion EX is one of the many powerful Pokemon being release in Steam Siege which can be purchased at any major retails.

You can learn more about Steam Siege by watching a video that can be found here.

If you want to get Volcanion on your video game then you will need to head to GameStop in October. During the month of October, trainers can head to GameStop to pick up a code to receive Volcanion for their Pokémon Omega Ruby, Pokémon Alpha Sapphire, Pokémon X, or Pokémon Y. This Volcanion will be at level 70 with an Assault Vest attached and will know the moves Steam Eruption, Flamethrower, Hydro Pump, Explosion.

Lastly, you can catch Volcanion in the anime! Volcanion will be in the newest Pokemon movie, Pokémon the Movie: Volcanion and the Mechanical Marvel. Below is a description for the movie:

Volcanion plays a significant role in Pokémon the Movie: Volcanion and the Mechanical Marvel, where Ash meets the Mythical Pokémon Volcanion when it crashes down from the sky, creating a cloud of dust —and a mysterious force binds the two of them together! Volcanion despises humans and tries to get away, but it’s forced to drag Ash along as it continues its rescue mission.

They arrive in a city of cogs and gears, where a corrupt minister has stolen the ultimate invention: the Artificial Pokémon Magearna, created 500 years ago. He plans to use its mysterious power to take control of this mechanical kingdom! Can Ash and Volcanion work together to rescue Magearna? One of the greatest battles in Pokémon history is about to unfold!

You can get a sneak peek of Volcanion in the movie by watch the trailer below.

Things are heating up for Pokemon as the #Pokemon20 celebration continues! 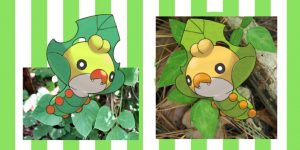