Pikachu is flying high with a brand new friend!
For years Pikachu has been helping bring in the Christmas season by participating in the Macy’s Thanksgiving Parade. This parade is an American tradition to help celebrate Thanksgiving but also announce the arrival of Christmas to people around the United States.

Now, that has changed with a brand new balloon! For the first time ever, Pikachu will be joined with Eevee in the Macy’s Thanksgiving Parade!

When you tune into the Macy’s Thanksgiving Parade, you will see Pikachu and Eevee riding together on a sled. Both Pikachu and Eevee are keeping warm. Pikachu is wearing a snugly scarf while Eevee is wearing a cute little hat. The smiles on their face will surely make you smile as well. Together they are riding their Pokeball sled into the Christmas season. This new balloon is the fourth Pokemon balloon featured in the Macy’s Thanksgiving Parade. The original Pikachu Balloon debut in 2001 as a simple Pikachu balloon.

In 2006, a brand new Pikachu Balloon was introduce. This was known for having light up cheeks and would chase a Pokeball. It also had the misfortune to be flying while deflated ears.

The third and previous Pikachu balloon first flew in 2014. This balloon was the first time Pikachu was depicted in partaking in the holiday celebration in the Macy’s Thanksgiving Parade. You can tell by seeing Pikachu wearing winter scarf and hat. He is also holding a small snow-Pikachu.

This new balloon has the same feeling of Christmas cheer but now features Eevee. Since the Let’s Go games in 2018, Eevee has been made into a secondary mascot for Pokemon. This balloon is proof of this idea of Eevee as a secondary mascot. 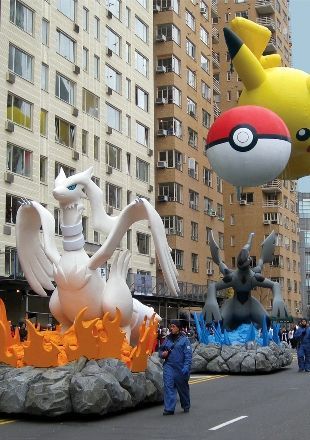 Though, this isn’t the first time that Pikachu is joined by a friend during the Macy’s Thanksgiving Parade. For the release of Pokemon Black & Pokemon White in 2010, a pair of Zekrom and Reshiram statues led Pikachu in the parade.

Also, last year we saw the Pikachu Outbreak join Pikachu as well. They had used this Pikachu Outbreak at the Macy’s Thanksgiving Parade to announce and reveal Pokemon’s 25th Anniversary celebration.

The new balloon is surely to celebrate Pokemon’s 25th anniversary. This is the perfect year to do so and I personally love this balloon. It encompass the Christmas spirit that the Macy’s Thanksgiving Parade with Pikachu and Eevee riding on a festive sled. This new float not only features more Pokemon but is just so happy. Perfect to ring in the Christmas season.

You can watch Pikachu and Eevee slide in the skies of the 95th Macy’s Thanksgiving Parade at 9AM in all timezones on November 25th, 2021 on NBC.