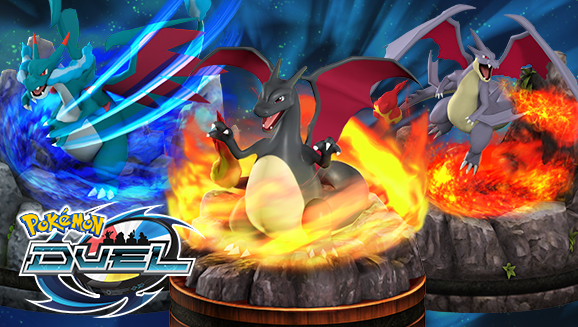 Does this figure deserve a spot on your team?

As Duel’s playability time draws steadily closer to an end, let’s take another look at one, or rather three, of the potential figures you could test out in the remaining two months of playtime. This time we’re tackling an old favorite of mine, Charizard. Charizard is a UX rarity figure that has two possible mega evolutions and access to potentially three Z-moves. It is one of the most frequently update figures throughout its time in Pokémon Duel, with its original spin dial largely mimicking its Pokémon Trading Figure Game spin dial. In the modern version of Pokémon Duel, Charizard has a much different spin dial, with Iron Tail being swapped for Dragon Tail, Fire Spin seeing a damage increase, and the dial over all seeing tile size changes over time. Charizard and its megas also have shiny variations of their figures, but their dials are exactly the same as their normally colored counterparts, so they’re great for looks and not much else. So, with this all in mind, let’s take a look and see if Charizard’s updates have kept it competitively viable, or if this dragon been slain.

Charizard, in the most recent update to Pokémon Duel, is a fire/flying type with a movement of 2. It lacks any special ability and has two miss tiles, one size 4 and one size 8. It has two moves: Dragon Tail and Fire Spin. Dragon Tail is a white attack with a damage of 100 and is a size 28 tile. If it successfully lands, it benches your battle opponent (unless they are knocked out to the PC) and forces them to wait. Fire Spin is a white attack and a size 56 tile. While its initial power is 60, Fire Spin allows the player to keep spinning until it no longer lands on Fire Spin, allowing the damage to multiply every time it lands on Fire Spin. Charizard also gets access to two Z-Moves, Supersonic Skystrike and Inferno Overdrive, both of which have a damage of 200. Supersonic Skystrike causes any Pokémon adjacent to the battle opponent other than this Pokémon spin. Those that spin White Attacks move to the bench. However, Charizard then gains Wait 3. Infero Overdrive causes the battle opponent and the Pokémon in a straight line directly behind it become burned.

Mega Charizard X is a UX rarity figure with a fire/dragon typing and a movement of 3. It has the special ability Inferno Ladder which means that when this Pokémon appears as a Mega Evolution, it removes the frozen condition from all of your Pokémon. Pokémon knocked out by the attacks of this Pokémon are also temporarily removed from the duel, returning to the bench 7 turns later. Mega Charizard X has two size 4 miss tiles and gets access to two white attacks: Backdraft and Bright Flame. Backdraft is a damage 120 move that move the battle opponent and opposing Pokémon adjacent to the battle opponent to their PC. Bright Flame has the same effects and power as Fire Spin, damage 60 but with a multiplier added for each successful spin on Bright Flame, but it also has the additional effect of burning all adjacent figures as well. On top of having access to Inferno Overdrive, though now at damage 240, Mega Charizard X’s dragon typing also lets it use Devastating Drake. This Z-move is a 4 star purple attack that forces a Pokémon on the field spins. If it spins a Miss or a White Attack of 120 damage or more, it is knocked out.

Mega Charizard Y is a UX rarity figure with a fire/flying typing and a movement of 3. It has the special ability Blue Skies Captor, which allows this Pokémon to use an MP move to fly over Pokémon on the field that don’t have Soar. It will also move opposing Pokémon surrounded by this Pokémon to your P.C. Your Fire-type Pokémon deal +10 damage and your Flying-type Pokémon deal +10 damage. Mega Charizard Y has two size 4 miss tiles and gets access to two white attacks: Flashover and Bright Flame. Bright Flame functions exactly the same as it does for Charizard X, but Flashover is very different from Backdraft. Flashover is a 3 star purple attack that causes the battle opponent and opposing Pokémon adjacent to it become burned. Then those Pokémon gain Wait 3. Mega Charizard also gets access to Supersonic Skystrike and Inferno Overdrive, but notably the damage is only at 120 for both.

So, is Charizard worth your while? Despite being a fan favorite, in the past, Charizard was not a worthwhile choice. It was considered not very reliable since it could do anywhere between 50 and 9950 damage, but most of the time it will at least deal an average of 200, so it can be very good damage wise. In addition, in previous versions of Pokémon Duel, Charizard only had an MP of 1, making it almost mandatory to evolve it from Charmeleon if you wanted to give Charizard any range of motion. However, with the recent updates to the figure and the advent of Z-Moves and Mega Evolutions, Charizard can be a very valuable of many teams. Even without its Mega Evolutions, Charizard’s access to Fire Spin gives it the potential to beat out several Z-Moves power wise. Typically, due to its ability, Mega Charizard Y tends to be the more popular choice competitively, but Mega Charizard X is not to be doubted as it carries a lot of power behind its punches.

Personally, having been able to try out both Mega Evolutions myself due to the free figures, I’ve found I tend to prefer Mega Charizard Y’s mobility, since it pairs well with my Sky Shaymin based team. Unlike Sky Shaymin, which relies mostly on dodging to make it to the other end of the board and can struggle when it comes to knocking out opponents, Mega Charizard Y gets access to a fairly powerful white attack and a purple attack that can allow it to stall and force opponents out of the arena. However, if brute force is more your style, Mega Charizard X is great for breaking through walls like Aggron that its Y counterpart can struggle with. But that said, Charizard as its own figure can stand up to most opponents quite well, as I’ve used it for years without access to a mega. While it was a bit of a struggle to use back when it had MP 1, the additional movement point makes for a much greater threat out of this piece.

So all in all, I’d say Charizard and its Mega Evolutions are great figures to have on your team. But, as always, here’s a couple possible counter strategies that will work against these figures in case you have to come to face off against them in a duel. Status Conditions can greatly cripple all three of these figures, so figures like Lunala which utilize confusion or any sort of purple attacks are great counters to these figures. Noxious or poison in general are especially crippling, as they take much of the punch out of Fire Spin’s power, making it much less of a threat. Paralysis can also be detrimental, as it will remove either Backdraft, Flashover, or Dragon Tail from the figures, meaning they will have to rely solely on the luck of the multiplier to get a hit in. Finally, if all else fails, at least with the mega evolutions, they should only last seven turns, and unless your opponent has Recycle as a plate, then once you’ve stalled them out, those megas are down and out for the rest of the battle.

With this all in mind, and only two months left to play, let’s get out there and duel!