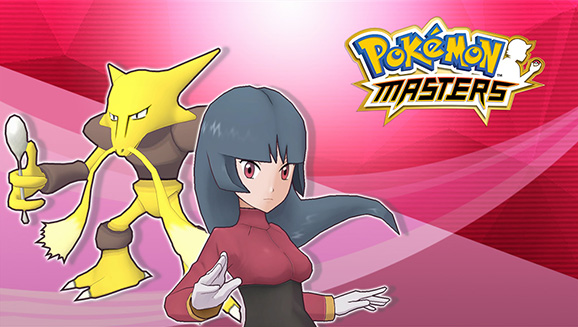 Pokémon Masters has released its next challenge!

Sabrina and Alakazam have arrived at Pasio and are available to scout until March 30! You can scout this 5★ sync pair and then try to earn sync orbs to make them even more powerful. You might find Sabrina & Alakazam to be helpful allies as you take on the second Battle Villa challenge, which has just begun.

Sabrina and Alakazam are a five star support class pair with a weakness to dark types. Alakazam has three potential passive skills: Unflappable, Dauntless, and Speed Entry 1. Unflappable prevents the Pokémon from flinching. Dauntless prevents Special Attack from being lowered. Finally, Speed Entry 1 raises the user’s speed when they enter the battle. Alakazam has two moves: Psybeam, which has a small chance of confusing the target, and Reflect, which reduces the damage taken from physical moves. Sabrina can also assist Alakazam and her teammates with Dire Hit All, which raises the critical hit rate of all teammates on the field. She also has the move, Sixth Sense! which restores a bit of an ally’s HP, drastically raises an ally’s Sp. Atk, and raises an ally’s accuracy. They also have access to the sync move, ESP Prodigy Psywave, which mega evolves Alakazam until the end of the battle.

So get out there and battle, trainers!