Uri Geller is making news but he isn’t the only person who inspired some Pokemon designs.

Recently Uri Geller has made news because he has decided to allow Nintendo and Pokemon to make Kadabra TCG cards. This is all because of a suppose ban that was place on the card.

For those who didn’t know, the Abra line are all inspired by different magicians. This could be seen in their Japanese names. Abra’s Japanese name is Casey. This is based on famous magician, Edgar Cayce, who is known for going into trance. Similar to how Abra is known to sleep for long periods of time. Meanwhile, Alakazama’s Japanese name is Foodin. This is based on Harry Houdini and Jean-Eugène Robert-Houdin. Harry Hoodin being a famous escape artist while Jean-Eugène Robert-Houdin is known as the father of modern magicians.

In Kadabra’s case, his Japanese name is Yungerer which is based on Uri Geller. A magician who was popular in the 1970’s for doing tricks such as bending spoons. Geller said he was bending the spoons using psychic powers. Though, it was later proven on the Tonight Show that he was a fraud. In reality, he was rubbing spoons to make then easier to bend over when they were head upright.

Now Geller spends his time as an illusionist and showing how to do these tricks. Though, for some time being he would file lawsuits for those who took his likeness. Pokemon and Nintendo found themselves on the receiving end of these lawsuits in the early 2000s due to Kadabra and “Dark Kadabra” card from Team Rocket TCG set. The case was dismissed but since then, Pokemon and Nintendo decided to not print anymore Kadabra cards. Instead, they found workarounds to have Alakazam appear in the TCG.

Though, Uri Geller isn’t the only real life person who has inspired Pokemon designs. Because of the news regarding Kadabra, I want to spotlight some famous people who have also inspired some of your favorite Pokemon designs. The first Pokemon I want to bring up is Wobbuffet. This Pokemon may be inspired by the famous punching bag that when you hit will just come right back up. Though, Wobbuffet’s famous pose is based on Japanese comedian, Sanpei Hayashiya.

This Rakugo comedian would always put his hand to the top of his head with a smile of sorts on his face. He would then say, “That’s the way it is, madam!” If you say it in Japanese then it would be said as “Sō nansu, okusan!”. This so just happens to be similar to Wobbuffet’s Japanese name, Sonans.

So in reality, Wobbuffet’s actions and name is based on this one Japanese comedian. The next time you see Wobbuffet in the anime popping up to say his name. Try to imagine him saying “That’s just the way it is!”. It will make things so much funnier. This fighting duo have several different inspirations when it comes to them.

If we look at Hitmonlee then we see that his English name is based on Bruce Lee. His name is Japanese is Sawamular which is based on Tadashi Sawamura. He was a famous kickboxer in Japan who basically provided the model for Hitmonlee. Sirasomon is Hitmonlee’s name in Korea. The name inspiration is from Yi Sung Sun, a street knight in South Korea. Snorlax is a lovable bear though his origin doesn’t completely come from a cave in the woods. He actually has some inspiration based on a programmer in Game Freak.

Part of Snorlax inspiration comes from Kōji Nishino who works at Game Freak. You can especially see this in Snorlax’s Japanese name which is Kabigon. This also happens to be Kōji Nishino’s nickname.

Though, if you ever see picture of Kōji Nishino and look at his face then you may notice something. Especially at how similar his profile picture happens to be similar to Snorlax’s face. It is kind of cute. 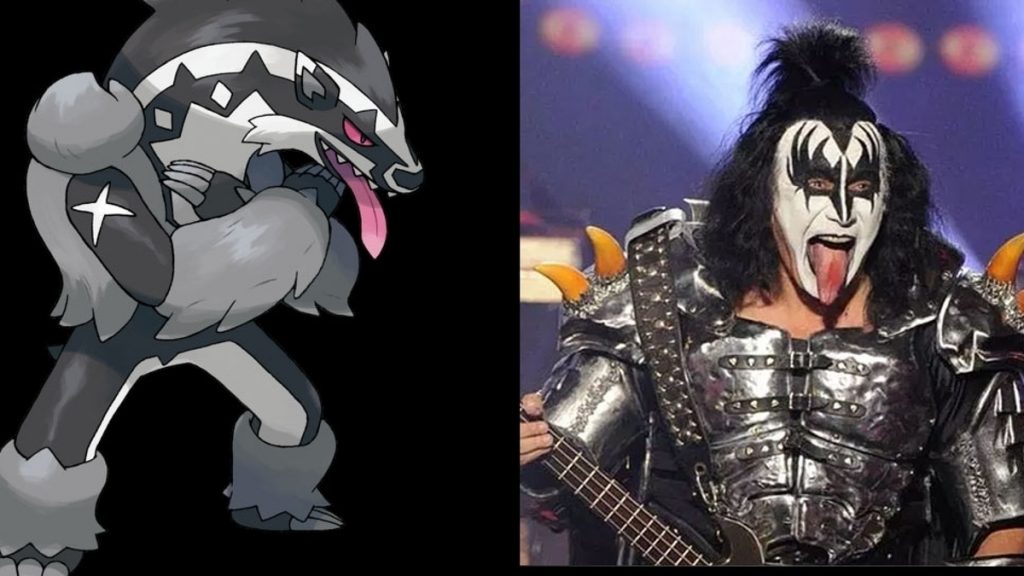 Lastly, we want to end this article with the latest and maybe best famous person who has inspired a Pokemon. That would be Obstagoon who was heavily inspired by Gene Simmons and KISS.

What can we say about Obstagoon and KISS? The whole Obstagoon line is based on this rock back from the 1970s and 1980s. The colors, the star in the eyes and tongue sticking out. Everything about this Pokemon just screams KISS. You can totally see Obstagoon preforming on stage with KISS as their fifth member.

When Obstagoon was first revealed, fans went out to ask Gene Simmons what he thought about having a Pokemon inspired by him. He went on to say this below.

“Pokémon has been a part of our household for decades, ever since our kids first discovered them. And to see Pokémon pay homage to KISS, is flattering.”

Now that is a positive reaction to having a Pokemon based on you. Maybe one of the coolest things to hear and best way to react.

Obstagoon may be based on a badger but give him a guitar and he will rock n’ roll all night long.

If you want to see more Pokemon who are based on famous people then I suggest you watch this video by HoopsandHipHop. It was used to help gain some insight on some of these Pokemon featured in this article.

We hope that you enjoyed this article to help shed some light on some famous people who have inspired some of your favorite Pokemon. Hopefully we will see a new Kadabra card in the next year or two from now.